What The Pho? Hanoi Bartender Creates The “Pho” Cocktail

Have you ever gotten drunk off a bowl of pho? I’m not speaking in some metaphorical “it was so good, I felt some kind of euphoria” kind of way. I mean literally drunk…

Well ok, maybe I’m not talking about the traditional bowl noodles and soup—in a sense—but there is a cocktail that is becoming quite popular around the Hanoi bar circuit that comes pretty damn close.

Mixologist Pham Tien Tiep invented the “Pho” Cocktail back in 2012, as his entry to the Diageo World Class competition. He took home the “Best Bartender in Vietnam” award for his efforts that year.

The Pho Cocktail set aflame and sifted through various spices.

Taking the traditional Vietnamese dish and transforming it into a cocktail may not sound like a prize-winning recipe, but after trying it, I have to say something about the drink just works. The pho taste is achieved by sifting gin and Cointreau through cinnamon, anise and cardamom.

A flame is used to infuse the flavours of spices and alcohol together as it is drained through a metal apparatus. These spices, normally used to give the pho’s broth its alluring aroma are now used to instill its fragrance into this sweet-scented cocktail.

Final step is to pour the freshly mixed cocktail over a stick of cinnamon and into a warped old-fashioned glass.

The fragrance given off from the cocktail is no doubt akin to pho ga broth, but upon first sip, the differences become apparent. Served over ice, the pho cocktail is actually quite sweet with a hint of sourness and a perfume aftertaste. The alcohol is masked by all the subsequent spices.

It is an excellent drink worth sipping and savouring. The addition of coriander, chili and lime adds further to the cocktail’s flavour profile.

Having taught his prize-winning creation to many of Tiep’s colleagues, Pho Cocktails are now served at many bars throughout Hanoi’s Old Quarter, including The Mojito Bar (19 Nguyễn Quang Bích) and The Unicorn Pub (2 Hàng Than). But it is the NE Cocktail and Wine Bar (3B Tống Duy Tân) where you’ll find the originator himself.

Finishing touch, adding chili and a dash of lime.

Tiep, who is owner and manager of NE also has a few other Vietnamese inspired creations on the menu. Many of NE’s signature cocktails are heavily influenced by Vietnamese culture and cuisine.

The botanicals and ingredients used for many of his concoctions seem more fitting in a kitchen rather than a bar, such as the “O Mai” Cocktail, which uses the popular dried apricot candy as a garnish and The Pickles, which is made with tomato and pickled mustard. Two ingredients used in the traditional Vietnamese soup “Canh Dua.”

“When people come to Vietnam they really want to try the salt of Vietnam” Tiep says about his cocktails. “It’s not about drinks like Singapore sling…you can find those everywhere.” NE does still serve a Singapore Sling…if you absolutely need one.

I can say that this cocktail is not for everyone, but the spectacle of the drink’s creation and the uniqueness of the drink itself is worth the price already…at least once. 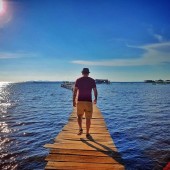 One Day In Phu Quoc

A Video Tour Of Sapa (As Seen From Above)

It’s Official! Everything Is Delicious At The Joy Hing Roasted Meat Restaurant